It’s Time to Put Anchors on the (Broadband) Map

We already know that the Federal Communication Commission’s current broadband maps are flawed – they overstate broadband availability, they don’t contain pricing information, and they rely too heavily on industry-provided data. The FCC is now seeking additional funding from Congress to improve its mapping efforts. But before Congress appropriates these funds, it should consider addressing another critical weakness in the proposed maps: the exclusion of schools, libraries, healthcare providers and other community anchor institutions (CAIs).

The FCC’s July 2020 Second Report and Order and Third Further Notice of Proposed Rulemaking (FNPRM) proposes to improve mapping granularity and accuracy for businesses and residential consumers, as required by the Broadband DATA Act enacted earlier this year. Unfortunately, despite language in the House Commerce Committee report and a floor statement from Senator Ed Markey calling for the FCC to include anchor institutions in the broadband maps, the FNPRM barely mentions CAIs.

Anchor institutions require affordable, high-quality broadband to provide many essential services to their communities, especially during the ongoing COVID-19 crisis.  But there is another reason to equip CAIs with high-quality connections – anchor institution broadband can and should be shared with the surrounding community. Many people lack home internet because it’s either unaffordable or unavailable to them. When CAI networks are open to interconnection, the institutions can serve as “jumping off” points to connect surrounding residents, and have the potential to offer more affordable connectivity to those who need it. CAIs need high-capacity broadband to bring this “To and Through” vision to life, and we need accurate maps to tell us which anchors need more bandwidth.

Given the widespread recognition of the key role that broadband plays in promoting education, healthcare, and economic growth, the FCC’s oversight is puzzling. The National Broadband Plan Goal #4   called for anchor institutions to have gigabit capacity by the year 2020, but we can’t even measure our progress toward the goal because the FCC doesn’t collect that information.

In addition, paragraph 90 of the FNPRM asks whether the FCC should use the new broadband maps for awarding E-rate and Rural Health Care (RHC) funding. Congress already answered this question – they should not. As we pointed out in an earlier blog, original versions of the Broadband DATA Act directed the FCC to use the maps for “all” future awards of funding, which could have unfairly stripped many E-rate and RHC participants of their financing. SHLB worked with congressional leaders and convinced them to limit the use of the maps to “services intended for use by residential and mobile consumers,” thus removing the threat to E-rate and RHC funding applicants. The FCC must follow Congress’ lead by using the maps to identify areas that need high-cost funding, not to eliminate funding for worthy E-rate and RHC applicants.

The SHLB Coalition filed comments with the FCC last month and an additional ex parte letter last week, urging the Commission to include anchor institutions in the maps. We also suggested that the FCC ask for another round of comment to explore how best to map the broadband available to and used by anchors. In short, SHLB supports improving broadband maps, and we could support additional funding for that effort. But the Commission should first comply with the congressional directive to map CAI broadband. 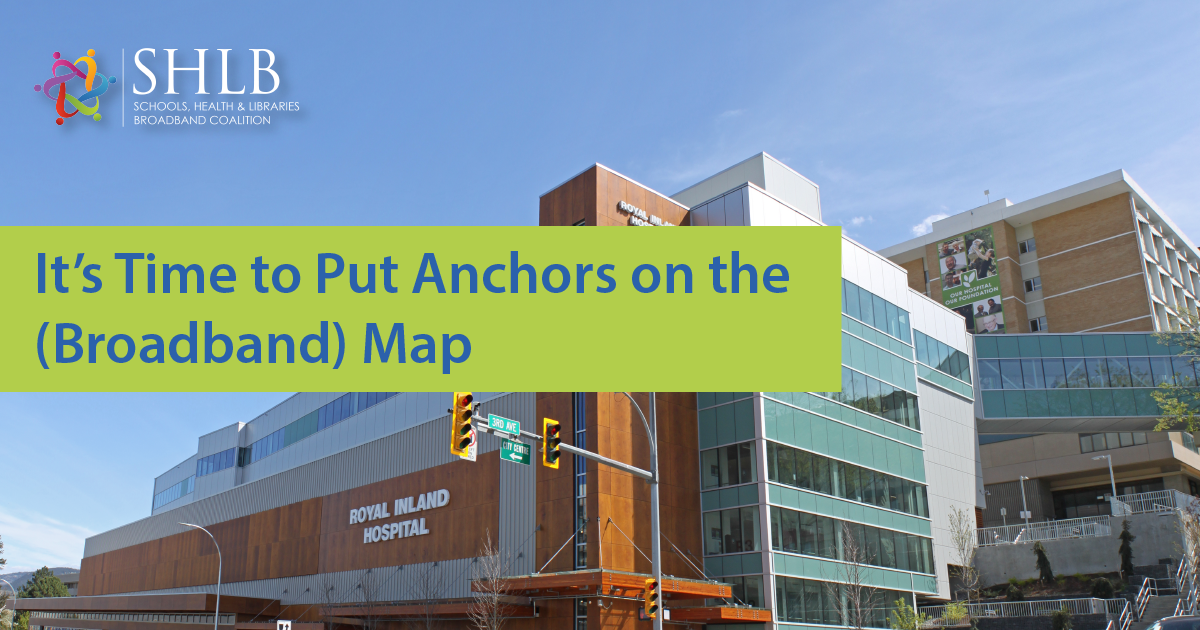