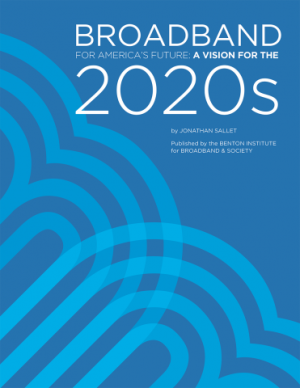 Despite the chorus of voices proclaiming the importance of closing the digital divide, an estimated 162 million Americans lack high-quality broadband. In the 21st century, this reality is simply unacceptable. The Federal Communications Commission adopted the ambitious National Broadband Plan in 2010, laying out a policy framework meant to end the connectivity gap over the decade. With the 2010’s ending in a few weeks, it’s time for policymakers to refresh their approach to digital equity.

Report author and Benton Fellow Jonathan Sallet previewed its policy recommendations for community anchor institution (CAI) connectivity at the 9th Annual SHLB Conference. Sallet identified the SHLB Coalition’s “To and Through” philosophy as a fundamental principle for CAI broadband policy. To put it simply, connecting anchors to high-quality broadband enables them to serve as jumping off points to extend connectivity to surrounding residents and businesses in the community.

The Benton report compiles case studies illustrating the real-world effectiveness of “To and Through”:

Unfortunately, some of the dialogue around closing the digital divide focuses on connecting residents and businesses, while completely ignoring the needs of CAIs. “Broadband for America’s Future” recognizes that connectivity for anchor institutions isn’t simply a goal of broadband deployment, but a necessary step in closing the digital divide. The report clearly shows we will not solve the digital divide unless policymakers and industry acknowledge the valuable role schools, libraries, and healthcare providers play in making broadband available and affordable to their surrounding communities. Learn more about the Benton Institute and read the full text of the report here.