What Does the Infrastructure Bill Mean for Anchor Institution Broadband?

Earlier this week, the Senate started to debate the Infrastructure Investment and Jobs Act, a $1 trillion package that includes $65 billion for broadband. The bill includes a number of SHLB objectives, like recognition that anchors need gigabit connectivity, and funding for middle mile networks and the Digital Equity Act.

The biggest headline, however, is the bill’s $42.45 billion Broadband Equity, Access, and Deployment (BEAD) program, which the National Telecommunications and Information Administration (NTIA) will dispense to the states. Acknowledging that there’s no closing the digital divide without anchors, the bill adopts a broad definition of “community anchor institution” that includes public housing authorities, healthcare providers, and other community support organizations – anchors that vulnerable populations depend upon the most.

Regrettably, one provision in the bill could undermine the otherwise good language. When doling out the funding, the program relegates anchors to third priority, meaning that funds may be completely awarded to connect unserved and underserved households before any funding goes to anchor institution connectivity. Coming in third may get you a bronze medal at the Olympics, but in this case it might get us nothing at all. In fact, the bill could be worse than saying nothing, as the language suggests that awardees cannot connect anchors until after all the homes are served, which could be never. This siloed approach to funding ignores the network economics: Placing anchors and households on the same shared network helps to lower the costs for everyone.

Another problem area is the BEAD program’s exclusive reliance on the new Federal Communications Commission (FCC) maps to determine where broadband is missing. The Broadband Deployment Accuracy and Technological Availability (DATA) Act maps have not yet been issued and may be a year away. Further, they may not be the best source of information, as they rely too heavily on the industry-provided data that’s notorious for overstating coverage. And of course, there’s the fact that these maps don’t include information about anchor institution connectivity. The simple solution to this problem would be for the BEAD program to supplement the FCC maps with additional sources, like the NTIA’s broadband access map and state maps. The infrastructure bill takes this approach to the middle mile program, and we encourage Congress to allow the BEAD program administrators to use the same variety of yardsticks.

On the positive side, the infrastructure bill appropriates $2.75 billion over five years for the Digital Equity Act to ensure every person can participate in society. Anchor institutions are eligible to receive this funding because of the fabulous work they do to provide digital literacy training and set up wireless community networks. To apply for funding, a state must describe how it will collaborate with key stakeholders to adopt its digital equity plan. Here, the legislation specifically recognizes anchor institutions as invaluable partners for digital inclusion.

Another noteworthy component of the infrastructure bill is the $1 billion pot of money for middle mile projects that are open to interconnection. These middle mile networks must be capable of providing gigabit level service to anchors, but the program does not allow awardees to connect community anchor institutions directly. So while it’s great that the bill acknowledges anchors, excluding direct connections to them will reduce the cost efficiency of these middle mile networks. Furthermore, the $1 billion appropriation won’t be enough to ensure that all communities have sufficient back-haul capacity to connect to the internet. New research from CENIC, Internet2, the Quilt, and the research and education network community finds that the U.S. must invest at least $5 billion in middle mile infrastructure.

Also worthy of scrutiny is the Universal Service Fund (USF) provision, which would direct the FCC to produce a report on the future of the USF within a number of days. The USF funding mechanism has been desperately in need of a facelift for years now, and with the contribution factor at around 30 percent, reform has never been more urgent. SHLB has been working with INCOMPAS, NTCA–The Rural Broadband Association, and others to suggest a reform proposal that would ensure sustainability for the USF programs on which anchor institutions depend. Let’s hope that the infrastructure bill USF report does not delay FCC action to protect the USF, as we’re eager to stabilize the funding mechanism.

On the whole, SHLB is pleased that this broadband infrastructure legislation is moving forward, but we do worry that this bill may not get anchors up to the gigabit speeds called for in the National Broadband Plan. Recognizing that CAIs require gigabit capacity is good to have in statutory language, but putting anchors last on the totem pole means that Congress has more work to do to deliver on the anchor institution gigabit promise. 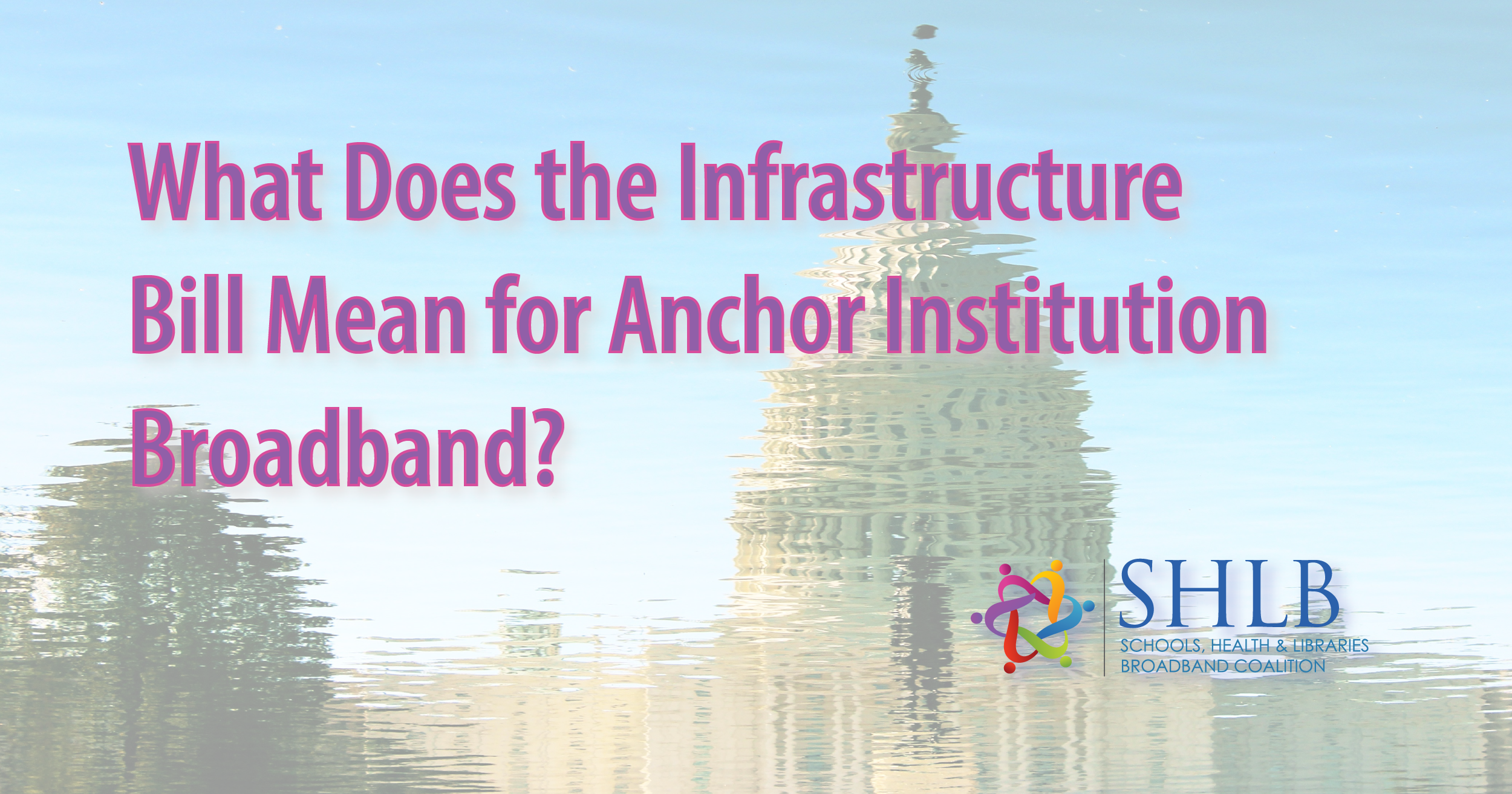