Why Didn’t the CARES Act Solve the Digital Divide?

An analysis of 2020 COVID-19 relief spending on broadband connectivity

With nearly everything happening in virtual spaces due to the coronavirus pandemic, broadband access has never been more critical. Even vaccine distribution relies on online booking platforms, making connectivity more important than ever – especially for at-risk groups like older adults who are less likely to have internet access. 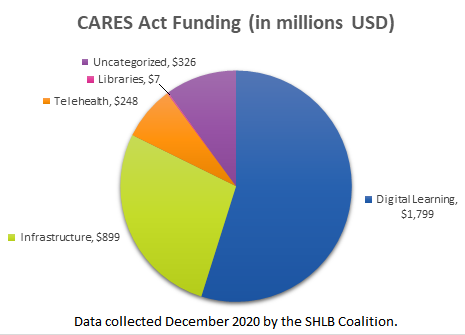 Although President Biden has just signed the American Rescue Plan Act (including $7 billion in E-rate funding) into law, some believe that the March 2020 Coronavirus Aid, Relief, and Economic Security (CARES) Act already took care of the connectivity gap. After all, the legislation included significant capital to connect students at home...Yet nearly a year later, the nation still struggles with the digital divide.

Unfortunately, the Federal Communications Commission’s most recent reports find that nearly 30 million Americans lack high-quality broadband access – though some estimates put that number at 42 million. Many of these people caught on the wrong side of the digital divide simply cannot afford the high cost of home internet, while others don’t have service in their region.

Our research found that 43 states used some CARES Act funding for broadband, in addition to the two federal programs administered by the FCC and USDA. For the purposes of this analysis, we’ve categorized the funding into five broadband-related buckets: Digital learning, infrastructure, telehealth, libraries, and other broadband spending. The biggest revelation: Over half of the spending focused on digital learning for K-12 students, while a third was spent on broadband infrastructure. All in all, it seems that officials placed a higher priority on immediate impact activity – digital learning – instead of focusing on long-term broadband deployment to address the digital divide.

States spent approximately $1.8 billion in funding from the CARES Act on digital learning projects, mostly through the Governor’s Emergency Education Relief Fund (GEER), the Elementary and Secondary School Education Relief Funds (ESSER), and state programs from other CARES grants. Most of this spending focused on devices, like laptops or iPad, and mobile hotspots. Hotspots can provide wireless internet access to several devices simultaneously, and while deploying them is relatively quick, their utility depends on the strength of the cellular providers’ signals and the number of simultaneous users. Some hotspot programs rely on the charity of broadband providers for free service, making them an unsustainable model for student connectivity. For example, Tennessee spent $65 million in grants to purchase and distribute hotspots that rely on internet service provided by T-Mobile’s Project 10Million, a 5 year initiative. The transience of such hotspot solutions exemplifies a common theme among nearly all CARES Act broadband projects: They are incomplete fixes to the digital divide.

A few states stand out for their focus on more complete educational connectivity. South Dakota’s K-12 Connect program, for instance, provides internet service at no cost to eligible K-12 students for the 2020-21 school year. South Dakota worked with telecom companies directly to provide service to the home, and the state covered the bill for eligible households so that their students had internet for distance learning. Also known as a “single payer agreement,” subsidizing wired broadband service to the home works particularly well for larger households. Yet even with a model like this, it takes time to build a permanent at-home connectivity infrastructure for all students, as school systems are painfully reminded during the pandemic.

Unfortunately, there weren’t many projects dedicated to higher education, perhaps because college student needs were not as highly publicized as K-12 issues have been. Some states allowed students to apply for broadband grants for telework, but these were few in comparison to K-12 students. A closer examination of the Higher Education Emergency Relief Fund (HEER) may reveal additional broadband spending, but the lack of publicly available information about this pot of money prevents an accurate estimate. Nonetheless, there’s a clear need for more investment in broadband for higher education students.

Nota Bene: California and Nebraska included broadband connectivity as a goal of their larger COVID education relief programs. However, the states did not quantify how much was designated for connectivity, so these estimates do not include their efforts.

Broadband infrastructure CARES Act spending amounted to roughly $900 million, spread across 18 states. Of amount, $100 million was funneled through the USDA ReConnect Program for rural broadband. Meanwhile, states distributed most of the remaining $800 million in the form of infrastructure grants, largely to private companies directly. Tennessee, for example, allocated $121 million to organizations and corporations who could demonstrate plans to improve broadband accessibility in the state. Other states opted to build their own way, as Maryland did by investing $25 million in three rural regions that lack infrastructure. In announcing their grants, many of these states listed digital learning or telehealth as potential benefactors of the programs. Though connectivity targets varied from state to state, most focused on connecting areas deemed under- or unserved by the FCC’s Form 477 data to the agency’s minimum standard for broadband internet, 25/3 Mbps. The 25/3 standard is controversial, as is the Form 477 data, as the speed doesn’t meet many households’ needs – particularly at a time when so many are learning and working from home.

On a more positive note, Iowa’s grant program seeks to not only provide 25/3 broadband access to unserved populations, but also to increase the coverage of those with 25/3 to speeds of 100/20. Infrastructure projects ought to strive to exceed the 25/3 standards, as this Iowa example does.

Despite the fact that we are weathering a public health crisis, only $248 million of CARES Act broadband spending went to healthcare, including $200 million for the FCC’s COVID-19 Telehealth program. The FCC telehealth program reimburses healthcare providers for connected devices, remote patient monitoring, internet connectivity, and other eligible expenses. Some beneficiaries of this program included nonprofits and hospitals.

Much of the telehealth spending focused on hotspots for hospitals, such as in Missouri and Arizona. An analysis by Healthcare Dive reveals that the funding targeted states with the worst COVID-19 outbreaks, at the expense of rural areas. Though more remote regions are not as densely populated, they have fewer doctors and often sparse medical infrastructures in place, meaning that these states actually needed more telehealth support.

For example, New York received $32.5 million and 74 grant awards for telehealth – more than any other state – while California received the second highest amount of telemedicine spending at roughly $10 million and 38 grant awards. The only states to receive no grants in this realm were Alaska, Hawaii, and Montana, regardless of Alaska’s notoriety for healthcare disparities. North Dakota, New Mexico, and Guam each received only one telehealth grant and no more than $400,000 in awards a piece.

Puerto Rico also spent $40 million on telemedicine, distributing these funds at regional level. The remaining verifiable $8 million was spent at the state level by Missouri and Arizona on telehealth accessibility.

On the whole, the COVID-19 Telehelath program did not meet the national need for healthcare connectivity, especially during a pandemic. Further broadband-related relief should prioritize states based on overall healthcare infrastructure, rather than COVID-19 hotbeds.

Only four states spent money on library connectivity, amounting to just $7 million, or one percent of all broadband spending. Libraries serve as free internet access points – a lifeline to underserved areas in particular – meaning that their CARES Act dollars frequently went toward hotspots and internet-enabled devices to reach these communities at home. Such library programs exemplify SHLB’s “to and through” philosophy, a strategy to deploy broadband through community anchor institutions to the surrounding residential population.

Idaho’s library spending is a noteworthy example, as it covers a gap in the state’s public-private grant program by using libraries to establish connections in communities of fewer than 10,000. Its infrastructure grant program, also funded through the CARES Act, focused on larger unconnected communities in the state.

Given that libraries are a permanent and reliable source for broadband, the CARES Act funding mentioned above will create semi-permanent connectivity points in all four states that can outlast the pandemic. If granted additional financial support, libraries would be able to move towards connecting even more residents, now and in the future.

Broadband programs that fall outside of the categories for this analysis – digital learning, infrastructure, telehealth, and libraries – received $326 million in CARES Act spending. In the spreadsheet of data, as well as the pie chart above, these projects are labeled “uncategorized.” The spending in this miscellaneous bucket was primarily dedicated to undefined telework programs, covering hotspots or infrastructure.

A key takeaway from this category was that a shockingly low amount of CARES Act spending went to Tribal broadband, even though Tribal communities have lower rates of connectivity than most other groups in America. The one bit of spending we identified for indigenous broadband was $1.5 million in New Mexico, which the state allocated to support the connectivity needs of its Tribal lands.

Aside from Tribal connectivity, some funding didn’t fit into our established categories due to the breadth of its application. For instance, Kansas opened up $130 million in grants for infrastructure, telehealth, digital learning, low-income connectivity, and more. This broad grant from Kansas reflects an attempt to fix the many problems that lack of connectivity has presented in a world where everything is done online.

The total amount of CARES Act funding for broadband – $3.28 billion – is far less than the $80 billion that the Paul de Sa FCC report called for in 2017. The recently reintroduced Accessible, Affordable Internet for All Act even proposes $90 billion for building the broadband infrastructure to achieve universal connectivity. All that’s to say, we still need more funding for broadband deployment.

To view the CARES Act spending data collected for this analysis, visit www.shlb.org/policy/research/CARES-Act.

SHLB is deeply grateful to Evan Shea, partnerships manager at EducationSuperHighway, for his contributions to our CARES Act data collection efforts