Studies show community anchor institutions (CAIs) often cannot afford to purchase the broadband capacity they need to serve their communities. While the E-rate and Rural Healthcare programs have been enormously helpful, many schools, libraries, and healthcare providers still report that they cannot purchase sufficient broadband because of the high cost or because robust broadband networks are not available. Many other anchor institutions—such as public media, public housing, community colleges, community centers, and other community-based organizations—do not receive federal subsidies for broadband connectivity and have even more trouble finding the resources to pay for high-quality broadband. Federal, state, and local governments need to address the connectivity challenges of tomorrow by providing additional financial resources and incentives to CAIs so that they can afford to purchase high-capacity broadband services.

Broadband prices are often much higher than anchor institution can afford to pay. The Consortium for School Networking’s Third Annual E-rate and Infrastructure Survey finds, “Affordability continues to be the primary impediment for securing robust connectivity; this is particularly true for monthly service fees but also for initial capital costs.”[1] EducationSuperHighway says, “Affordability is the number one barrier to meeting connectivity goals. Schools must dramatically increase the broadband they receive for the dollars they spend.”[2] Public libraries report the same, with roughly 40 percent stating they cannot afford to increase bandwidth.[3]

Affordability concerns are especially high in rural areas. In the fall of 2015, Education Week ran a series of stories about the difficulties rural schools face in paying for broadband services. The stories summarized the plight of two school districts, one in New Mexico and the other in rural Mississippi:

In its 2014 E-rate modernization orders, the Federal Communications Commission (FCC) noted evidence of excessively high prices paid by schools. For instance, the FCC found that schools in Mahleur County, Oregon, were paying $1,000 per month for a single T-1 line (at 1.544 Mbps) and that the rate paid by schools in Iowa for a 45 Mbps connection varied between $210 and $3,375 per month.[7]

[H]igher bandwidth and greater reliability comes with much higher prices in rural areas—as much as three times as expensive compared to urban areas—leading to a larger connectivity gap for more advanced medical services.  Especially for telemedicine and other services that require rapid and reliable transmission of high volumes of clinical data, the broadband connectivity gap can be a considerable barrier to improving rural health.[8]

The American Library Association noted in public comments filed with the FCC before the E-rate modernization orders were released that:

Many, if not most, rural libraries pay disproportionately high costs for broadband services. For example, one library in Arizona’s Apache County pays more than $18,000 for 5 Mbps metro Ethernet service compared to a Maricopa County library that pays $11,000 for 100 Mbps service, annually. Similarly, an Idaho library near the Montana border is paying more than $1,300 each month for wireless 5 Mbps service. The only other choice for Internet is dial-up. In contrast, a suburban library near Boise pays $750 per month for 40 Mbps.[9]

Many anchor institutions cannot afford their share of the cost of broadband, even after receiving federal funds from programs like E-rate. This could be the result of insufficient local budgets or excessive pricing by broadband providers. Because there is little competition in rural areas, broadband providers may have little incentive to lower prices, especially because they realize the E-rate and Rural Healthcare programs will subsidize a portion of the cost.

Anchor institutions other than schools, libraries, and health clinics likely face similar challenges obtaining affordable, high-capacity broadband, but there is little data collected to document the scope of this challenge.

Fortunately, some states have developed programs to address CAIs’ funding and broadband challenges. Below are a few examples:

While some states and the federal government have programs that provide funding for anchor institutions, the demand for broadband services continues to grow and government programs need to be reformed to adapt to the changing marketplace.  EducationSuperHighway estimates that the typical school district   will need to triple its broadband capacity in the next three years. The FCC’s long-term target for schools, as recommended by the State Educational Technology Directors Association, is 1 Gbps Internet access per 1,000 users by 2018.[18] The FCC also adopted the targets for libraries that were recommended by the American Library Association (ALA) – a minimum of 100 Mbps for libraries serving communities of less than 50,000 people and 1 Gbps for libraries serving larger communities.

In 2014, the FCC added $1.5 billion in annual support, indexed to inflation, bringing the E-rate program to about $4 billion per year. Recognizing the high costs of building additional broadband networks, the FCC also offered to award an additional 10 percent in E-rate funding to states that contribute their own funding to support 10 percent of the costs of special construction projects deploying fiber to schools and libraries. This decision could help make fiber connectivity more affordable, especially in rural areas.

But the FCC did not increase the percentage subsidy for rural schools and libraries that simply purchase service using existing networks. The FCC did allow schools and libraries to self-provision fiber—that is, construct, own, operate, and maintain their own network or a portion of a network—as long as they compare the costs of doing so to the costs of leased services. This option allowed the Calhoun County, Mississippi, school district to seek bids for self-provisioning. That request for proposals led to the offer of fiber from existing carriers and, as of December 2015, Calhoun County schools now have access to fiber.

The FCC also required recipients of high-cost support to offer broadband service in response to a posted Description of Services Requested and Certification Form (FCC Form 470) to eligible schools and libraries at rates reasonably comparable to rates charged to schools and libraries in urban areas for similar services. The FCC directed its Wireline Competition Bureau to develop pricing benchmarks for these services, but so far, the benchmarks have not been released.

The FCC also reformed the Rural Health Care (RHC) program in 2012, but the reduction in the amount of subsidy from 85 percent for the RHC pilot program to 65 percent for the Healthcare Connect Fund (HCF) has thwarted the goals of the program. Partly for this reason, only a third of RHC funding has been committed for the HCF.[19] Of the $236 million committed for funding year 2015 to date (through May 31, 2016), only $77 million was committed to HCF applicants. A significant number of rural health providers still have 5 Mbps or less, with many still using legacy copper. This is at least partially because healthcare providers struggle to raise the 35 percent match funding and have been unable to purchase necessary upgrades.

Government programs need to collect more detailed information about the levels of connectivity of anchor institutions and their needs for connectivity in the future. The FCC was able to increase funding for the E-rate program in part because two organizations (the SHLB Coalition and EducationSuperHighway) submitted studies estimating the costs of deploying fiber to school and libraries in rural areas. These studies made it clear that additional funding was necessary to ensure that rural schools and libraries have sufficient high-speed connectivity. Once additional data is collected about the prices of broadband access, policymakers will be in a better position to identify the amount of the subsidies necessary to ensure that anchor institutions can afford to purchase the broadband services they need.

Many anchor institutions other than schools, libraries, and health care providers do not receive federal government subsidies, yet they have significant needs for high-capacity broadband. Community colleges, community centers, public housing projects, public media, and other community-based organizations can provide valuable services for their communities, especially for low-income populations. State and local programs to make broadband service more affordable for these anchors would be especially helpful to the communities they serve.

In addition to providing direct financial subsidies to anchor institutions, policymakers can also reduce anchors’ connection costs by encouraging network sharing.[20] As the National Broadband Plan recognized, the more users share a network, the lower the per-user costs will be. Some federal and state programs discourage network sharing by restricting programs to particular types of users, thereby creating “silos” that are inefficient and lead to duplicative investments. For instance, the E-rate program funds are restricted to “educational services” and “on-campus” use; whether these networks can or cannot be shared with other entities or uses is not clear.

There are several examples of shared networks that offer lower prices for anchor institutions. The nDanville Fiber project in Virginia began with an effort by the electric utility to deploy fiber to enhance its smart grid, and then expanded to schools, city offices, and public safety. nDanville then expanded again to serve commercial providers and residences, as well, offering more affordable services to all users.[21]

The Corporation for Education Network Initiatives in California (CENIC), the research and education network in California, recently opened its network to carry library traffic.[22] The BTOP-funded projects were designed to carry the traffic of all anchor institutions and have open interconnection so that their capacity can be shared with commercial customers. Aggregating demand on joint networks can lower prices to affordable levels for all users and thus can reduce the need for direct subsidies.

The Utah Education and Telehealth Network (UETN) offers a different model. UETN manages a large network that provides broadband capability to Utah schools, colleges, libraries, clinics, and hospitals. The network saves Utah institutions thousands of dollars per month by purchasing Internet access in bulk from multiple competing Internet service providers. UETN has also been instrumental in reducing broadband costs throughout the state. High-speed broadband costs have been reduced by at least 50 percent in most areas of Utah, largely due to UETN seeking bids for aggregated Internet services each year. Through this strategy, UETN has driven aggregated Internet access costs for the state down to less than $1/Mbps.  As an added bonus – the underlying private sector broadband infrastructure that distributes the aggregated Internet access is almost entirely composed of scalable fiber.

As noted above, community anchor institutions face significant challenges when trying to acquire afford- able broadband, especially when budgets are tight or shrinking. Below are some recommended actions that support the goal of affordable high-capacity broadband services for all anchor institutions: 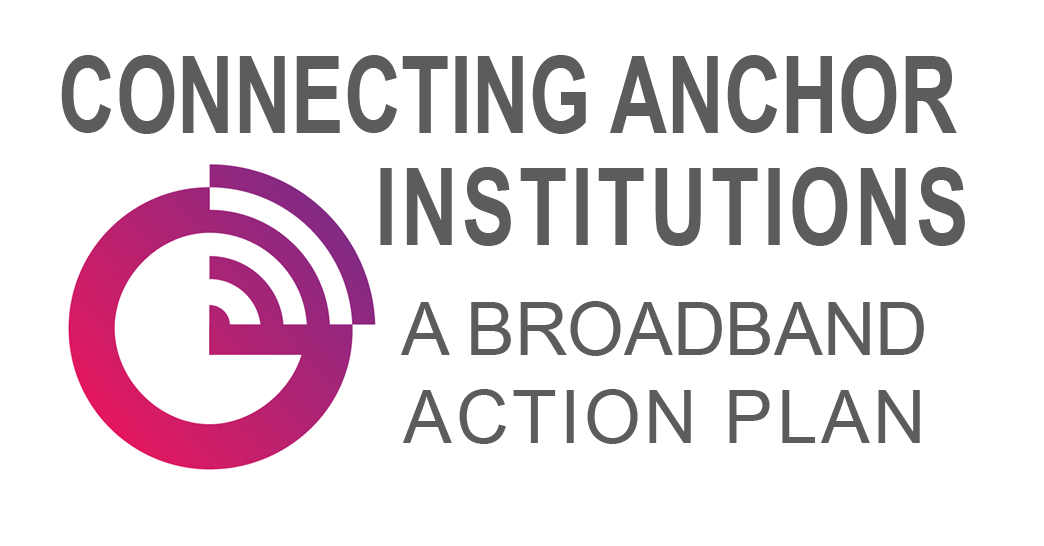